DE PICQUIGNEY (PINCKNEY) FAMILY
Families of the Domesday Book, 5 vols.
by Charles Graves
2018
Loyd (Origins of Some Anglo-Norman Families 1951) proves that that William son of Ansculf de Picquigney and his uncle Ghilo de Picquigney are from that place on the Somme river south of Amiens in France.. A Ghilo de Picquigney, probably son of the above mentioned Ghilo, founded a priory at Weedon, Northants,, as a cell of St. Lucien of Beauvais ‘because its monks had a small priory (Notre Dame du Mont) near Picquigney on the Somme’. Loyd also notes under his item on Baudemont (otherwise de Bosco from Eure, arr. Les Andeleys (cant. Ecos) whereby the granddaughter of Baldric de Bosco, Hildeburg, married as second husband, a Robert de Pinkeny mentioned as having given gifts to St. Ouen’s, Rouen (in charter of 1211).

‘Pinkney Family Origins’ as seen in Google notes that Guermond was lord of Picquigny, and married to an Adela, and they lived in the castle at Picquigny. Their children were: Ansculf de Picquigny; Guermond, Latin Patriarch of Jerusalem; Eustace, succ. his father at Picquigny; Jean, archdeacon of Amiens; and Ghilo de Picquigny. The History of the Pinckney family includes the following information (Google) The castle at Picquigni existed since the eighth century and was head of an important barony, the family being maternally descended from Charlemagne. The family’s ‘vidomes’ were magnates in medieval France, hereditary officers of the bishops of Amiens, and their abode in Amiens was called ‘Le Vidome’. The family owned land in Vernon sur Seine and thus William the Conqueror was their chief lord.

Battle Abbey Roll (those who fought at the Battle of Hastings 1066) includes the names of Anscoul de Picquigny and Guillaume de Picquigny  (Ghilo). As we see below Anscoul was later sheriff of Northants. and his son William son of Ansculf held widely at Domesday Book time as did William’s uncle Ghilo. Besides the Grey family (also from near Piquigney) this family seems to have been the only supporter of William I from Piquigney, and the family was rewarded by holdings in at least 13 counties as seen in Domesday Book in particular in Warwicks., Staffs., Northants. and Bucks.

In Warwicks. William Fitzansculf held villages around Birmingham: at Aston juxta Birmingham of the king, otherwise with his own vassals Ricoard (4 hides), Peter who held 2 hides at Erdington; Stannchetel held a hide at Witton in Aston; Drogo held 3 hides at Edgbarton and Roger held Essington Busbury (Staffs.)(Warwicks Domesday Book).

William Fitzansculf also held at Seisden (Walter held of him); Ettingshall (where Robert held); Bushbury ; In Cuttlestone hundred William held Pendeford in Tettenhall (Almar held) and Moseley in Bushbury (where Roger held; Countess Godiva had held it before).

In Offlow hundred William Fitzansculf held Bradley in Bilston (Walbert held of him); Aldridge and Great Barr in Aldridge (Robert held in both); Rushall (Turchel held (Turchil of Warwicks. or another?); Perry Barr in Handsworth (Drogo held); Barre (probably Parva Barre of 1327); Handsworth. Ralf held under William Fitzansculf at Sibford Gower and at Drayton (near Wroxton, Oxon. where Turchil held in Domesday Book).


William Fitzansculf held at Wolverhampton and Sedgley, which were held by canons and a certain Geoffrey. The caput for William was at Dudley and he held 30 Staffs. estates east and west of Dudley. It is affirmed he held five Warwicks. holdings: Aston by Birmingham, Wetton, Erdington, Edgbaston and Birmingham. Only one of his Staffs. estates was held in demesne. Three were held by tenants (English and foreign): tenants were Robert, Drogo, Gilbert, Ralf and Walter as well as Baldwin (at Frankley, Worcs. also). Later most of these were held by the ‘Birmingham family’ (Staffs. VCH, vol. 6).

In Seisden hundred, Staffs. at Pendeford William son of Ansculf, lord of Dudley, held 2 hides (‘barony of Dudley’). In 1323 the barony was divided after the death of John, lord Somery whose daughter married John de Sutton. At Amblescote, Staffs. on the river Stour (boundary with Worcs.) William Fitzansculf held the manor together with Pain as sub-tenant. This descended with Old Swinford. Sir William de Stafford was lord in 1292 at Enville on the Shropshire border where William Fitzansculf held 3 hides and it descended with the barony of Dudley which was divided as shown above, in 1323. In the 1250s a mesne lordship was held by William de Birmingham. Sir John Birmingham was in Enfield and Morfe (where John Horewood of Kinver was terre tenant 1086). In Morfe William Fitzansculf held 5 hides in 1086 and in 1167 it went with Enville. It was held in 1323 by Margaret de Somery of Sutton. In 1166-67 Peter son of William de Birmingham held Morfe. Hugh of Morfe also held there. He was not the ‘Hugh son of Peter’ 1175-6; 1213-14).  Circa. 1154 this Hugh of Morfe witnessed the death of Gervase Painel, lord of Dudley. (Staffs. VCH. Seisden hundred vol. 20).

At Seisden in 1086 William Fitzansculf, baron of Dudley, held 5 hides. Walter held of him. ½ hide was held by William de Offini. In the 13th century the lords of Bradley held there. William Fitzansculf held 7 hides at Womborne (with Orton and Swindon). This was later held by Somery and Sutton families. Swindon was held later by Gervase Painel.

Also in Northants. Domesday Book is listed Gilo, brother of Ansculf who held in Foxleu hundred at Weedon Pinkeny three hides of the king. At Morton Geoffrey held of him 1 ½ hides and at Silverstone Godwin of him. In Tovecrste hundred at Wappenham Ghilo himself held two hides and in Albodenston hundred at Stane Ghilo had two hides. At Brime in Culworth Landric held under Ghilo and at Thorpe Mandeville Ingelram held two hides of him. Hugh and Landric held under Ghilo at Statesbury; Geoff and Robert held at Astwell, Geoff held at Syresham and in Wanclau hundred at Sulgrave Hugh, Landric and Otbert held of him.

In the Northants. Victoria County History vol. 2.2  we find the following on William Fitzansculf. At Barnack, Waltheof son of Siward gave the manor to Crowland Abbey. Then it came to William Fitzansculf (honour of Dudley). In mid- 12th century it was held by Ralph de Barnack under Fulk Painel. At Earls Barton (Hanforshoe hundred) Countess Judith held with her tenant Bondi. Then it went to King David of Scotland and to the Hastings family. Pinkney or Barnard’s manor in Earls Barton was held by David de Lindesy who married a Margery in 1241. Thomas de Lindesy (d. 1242) held ¼ fee there; his daughter married Henry de Pinkeny. Their heir was Gerard de Lindesy, son of Margery.

The coat of arms of Pinkeny: or a fesse indented of five points gules.
Henry was no doubt a descendant of Ghilo de Picquigney (see below).

Ghilo brother of Ansculf also held in Bucks.: in Stoke hundred at Datchet (13 ½ hides); in Bursham hundred at Boveney (‘Girard holds of Gilo’); in Ticheshele hundred at Thame (‘Alvred of Thame holds’).


William Fitzansculf himself held several manors in Siglach hundred and at Linford Robert held of him. In Mudshoe hundred at Chicheley Wibert and Baldwin held; in Hardmead Andrew and Payne held with Baldwin. At Milton Rupes Otbert held.

It is noted that William son of Ansculf  is ‘son of former sheriff Ansculf of the county’. Also, Ghilo, brother of Ansculf held in the county, and a Gilbert of Pinkeny held in Northants. in 1166.

In Buckinghamshire Victoria County History more information on the Picquigney family is forthcoming: at Great Hampden in Stone hundred William Fitzansculf held (then the honour of Dudley) and at Ellesborough. In the hundred of Stoke at Colnbrook / Dachet in 1086 Giles de Pinkney held. His grandson Giles (sheriff of Bucks. 1137) held, followed by Henry (d. 1210) and a Robert (a rebel who was pardoned) etc. 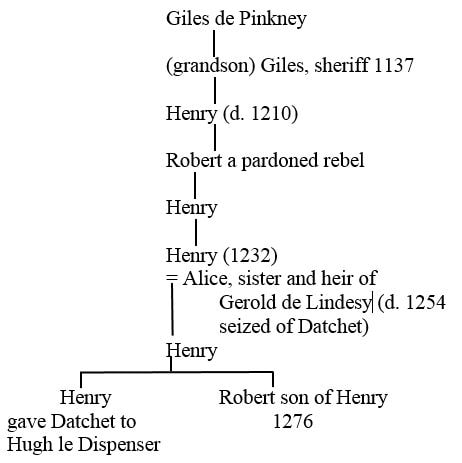 An Edmund de Pinkney occupied Datchet 1321 against Hugh le Dispenser. Then Edmund took it again 1326 and died 1332. A ‘Fisher’s Land’ was a manor in Datchet. In 1195 Solomon the fisher, a tenant of Henry de Pinkney, held there.

William Fitzansculf is noted as holding in Berkshire Domesday Book. He held in Reading hundred at Englefield (where Gilbert held under him) and at Hartridge (where Alvred held T.R.E. and in 1086); at Hodcot (Nachedore hundred) where a Stephen held under him. Also, ‘Baldwin was predecessor of William FItzansculf in Berks. and he continued as his tenant there in 1086’.

William Fitzansculf held Yattenden, Berks. (where Godebold held under him). ‘All holdings of William son of Ansculf in Berks. except Hartridge appear in Testa de Neville as ‘honour of Dudley’, the fief of Roger de Somery’. It was William Fitzansculf who held the castle at Dudley.

In Marcham hundred at Kingston Bagpuiz, Adeldon de Kingston held together with Ralf under William Fitzansculf.

In Surrey Domesday Book William Fitzansculf, in his capacity of lord of the honour of Dudley, held Whitford (where William Chamberlane held of him). William held Mitcham, Wandsworth, Milton (where Baldwin held), Anstee Farm, Abinger and Paddington in Abinger.

Finally, some mention of the de Picquigney family members is to be found in Bedfordshire Victoria County History vol.3. At Odell, the Domesday fief of Walter de Fleming (see Fleming), Simon de Fleming held. He died before 1197 succeeded by his younger son Walter in 1250. This Walter married Heloise, daughter of Hugh de Vivonia and their son was John de Walsall, a baron 1276-1295. John married Agnes, daughter of Sir Henry Pinkney. Their son was Thomas de Walsall holding since 1296. He died1300.

Tingrith (Manshead hundred) manor was held by the Pinkneys before the 13th century. 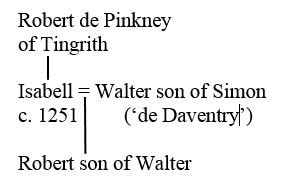 In 1443-4 Sir John Cornwall was declared to have held a manor in this parish not held by the king but of a certain Nicholas Borus.

The Picquigney family benefitted from relations with William I by 1086. William Fitz Ansculf and his uncle Ghilo of Picquigney at that time held over a hundred villages and manors in England. From the sources we have used it does not appear that William Fitzansculf had descendants. Thus persons with the Pinkney name in England probably descent from Ghilo de Picquigney.
Powered by